Medford: Previously, Medford appeared to be on its way to adopting a ban on all growing, both indoor and outdoor, in the city limits.  After a tremendous outpouring of testimony from those who opposed the ban, the city changed course, according to the Herald and News.  While they voted down the proposed ban, they are still exploring options to propose two possible bans to voters - one that will ban indoor growing of marijuana within the city limits and one that will ban outdoor growing of marijuana.

Columbia County: Columbia County is the first county in Oregon to adopt zoning and land-use regulations to allow commercial licensed activity of marijuana, according to the South County Spotlight.  The new regulations will prohibit growsites on residential properties that were two acres, but will allow enclosed growsites on five acre properties with conditional use permits.

Wilsonville: A Portland NORML member from Wilsonville provided us with an update on a proposed ban for marijuana licensed activity in the city.  The first reading and a public hearing will be held on December 7 at 7pm at the Wilsonville City Hall.

Pendleton: The Pendleton City Council has not been able to successfully pass a ban, with the most recent vote of 4-4, according to the East Oregonian.   They will continue to discuss a possible ban or referral to voters at the next meeting on December 1.  If they don’t reach a decision by the end of the year, they lose the right to ban marijuana under state law, according to the article.

La Pine: The city of La Pine may face a lawsuit by a local dispensary after attorneys for the Oregon Legislature determined that such taxes are illegal, according to the Bend Bulletin.  According to the November 13th letter, the law prohibits local governments from taxing medical marijuana.  The city of La Pine has collected approximately $5000 from its 5% tax on medical marijuana.  The City Council will evaluate their current tax ordinance with the city attorney and then review the issue at the December 9th meeting. 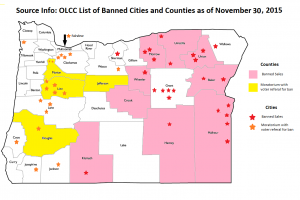 The OLCC has updated the list of banned counties and cities, adding one county and three cities to the list this past week.  The city of Hubbard is unique in this list, as it has adopted a temporary ordinance to ban marijuana which expires on August 1, 2016 or when the city adopts zoning and other regulations for marijuana facilities, whichever comes first, according to the footnote on the OLCC listing.  Those currently listed (* indicates new listing) with the OLCC include: