Medford: The Medford City Council voted to ban growing in residential zones, including medical marijuana, in the first reading of the ordinance, according to Keith Mansur in an article posted at the Weed Blog.  No one spoke in opposition to the ban.  Next Thursday will be the second reading and it is currently expected to pass.

McMinnville: The Mayor of McMinnville opposed a referral to voters on banning licensed marijuana activity, passing the tie-breaking vote, according to the Yamhill Valley News Register.  They will now consider a buffer around the college and other time, place and manner restrictions.

Bend: An advisory committee for the city of Bend has proposed a 3% tax on recreational marijuana, according to the Bend Bulletin.  The City Council still needs to consider the tax and if they approve it, it will go before voters in November 2016.

Deschutes County:  The Deschutes County Planning Commission heard alarmed testimony from residents who received an anonymous unsigned note in the mail that claimed loss of property values and negative effects on the community from marijuana growing and sourced a website, www.unwantedpotgrows.com, according to KTVZ.com.  The Committee expects to meet again on November 16th and 23rd at 5:30pm at 1300 Northwest Wall Street in Bend.

Gold Beach: The Gold Beach City Council will consider a marijuana tax in January, according to the Curry Coastal Pilot.

Wilsonville: The Wilsonville City Council is weighing its options for marijuana, including the possibility of a marijuana tax, according to the Portland Tribune.  They expect to resolve the issue in the first meeting of December.  Currently, there is an ordinance that prohibits businesses from operating in violation of federal law that prevents marijuana businesses from operating in the city.

Summerville: According to the La Grande Observer, the Summerville City Council unanimously voted to opt out of Measure 91.

Lake County: The Lake County Commissioners are moving forward with an ordinance that would ask voters whether or not to ban marijuana in the November 2016 Election, according to the Lake County Examiner. 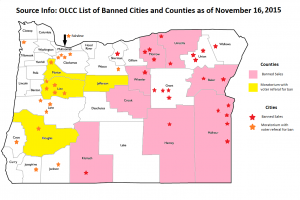 The OLCC has updated the list of banned counties and cities, adding one county and three cities to the list this past week.  Those currently listed (* indicates new listing) with the OLCC include: