State-wide: The Legislature passed an amendment to the anti-smoking laws, known as the Indoor Clean Air Act (ICAA), this past session that went largely unnoticed by cannabis consumers.  In the last few days, consumers have become aware of the changes when notices were distributed to local cannabis lounges informing them that they would be in violation of the law starting on January 1, 2016 when the law will ban the use of vapor pens and inhalant delivery systems including those used for cannabis, according to the Oregonian.  If they continue to operate after January 1st, they face daily fines of $500 for violating the ICAA.  Local cannabis lounges intend to fight the new rules, arguing that there are many consumers who need legal places to go to consume cannabis and that cannabis lounges should be exempted from the rules, much like cigar lounges are.

Newberg: The City Council in Newberg is beginning the process to develop land use and zoning regulations for the legal marijuana businesses that will be licensed in 2016.  A marijuana subcommittee will meet at 1pm on December 9th to address possible grower and processor regulations, according to The Newberg Graphic.

Wallowa County: Wallowa County Commissioners met on November 24th to hold a public hearing to discuss opting out of licensed marijuana activities and will meet again on December 7th at 10am in the Thornton Conference Room at the County Courthouse in Enterprise for a final hearing on the subject, according to the Wallowa County Chieftain.

Cove: The Cove City Council is the first city in Union County to decide to not opt-out of Measure 91, according to the La Grande Observer.  Council members who opposed opting out pointed to possible revenue and the reality that the black market exists all across the state and regulation will minimize the black market.  Way to go Cove!

Coos Bay: After public testimony was heard last week in Coos Bay about the current ordinance (Ordinance 461) that refuses licenses to anyone operating in violation of federal law, city councilors have scheduled further testimony for their meeting on January 19th, according to The World Link. While councilors found Tuesday’s testimony compelling, at least one councilor would like to hear more about dispensaries and the impact that prohibiting them has on the local community of cannabis consumers.

Lake Oswego: Lake Oswego City Council voted to continue their ban on licensed marijuana businesses and refer the issue to voters in the November 2016 General Election, according to the Portland Tribune.  The City Council will work on time, place and manner restrictions between now and November, in case voters reject the ban.

Pendleton: The Pendleton City Council has referred to voters a possible ban on marijuana licensed activity, according to My Columbia Basin.  The city was allowed to ban the licensed activity outright, since more than 55% of voters in the county opposed Measure 91, but a majority of city councilors supported putting the issue before voters and allowing them to make the ultimate decision in November of 2016.

Beaverton: The City of Beaverton previously allowed medical marijuana dispensaries in the city, but did not address recreational marijuana, according to the Portland Tribune.  The city council is now considering how to handle the possible retail outlets that will become licensed in 2016.  No date was offered for when this issue will next be discussed, although it is likely it will be at the next regularly scheduled meeting.

Hillsboro: The Hillsboro City Council will hold a public hearing on regulating licensed marijuana activity on December 9 at 6:30pm in the Shirley Huffman Auditorium at the city’s Civic Center located at 150 E Main St, according to the Hillsboro Tribune.  While the council currently agrees on buffer zones between marijuana facilities and residential zones, many other issues are still undecided.

Jackson County: Jackson County will continue a public hearing on marijuana grow restrictions on December 10th at 9am at the Jackson County Auditorium, located at 10 S Oakdale Ave in Medford, according to the Ashland Daily Tidings.  The proposed regulations were developed as a result of complaints from the public about local grow operations, but a hearing this past Thursday had an overflow crowd and a large number of proponents and opponents signed up to speak.  Any adopted ordinance would not apply within the city of Ashland; the Ashland City Council is expected to consider a first reading of an ordinance limiting, but not prohibiting, marijuana growing at its December 15th meeting.

St. Helens: The St. Helens City Council approved requirements for licensed marijuana businesses, including a 7% community impact payment to fund public safety, law enforcement and public health programs, according to the South County Spotlight.  The city will consider license fees at the next meeting on December 16th.

Clackamas County: The Clackamas County Commissioners passed a formal ordinance to regulate marijuana licensed activity this past week, and are expected to work on the details of amending the county zoning and development ordinance to comply with the ordinance, according to the Portland Tribune.  The proposed regulations are intended to be “really tight regulations - tighter than I believe anybody has done in this state,” according to Chairman John Ludlow. 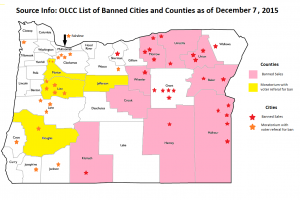 The OLCC has updated the list of banned counties and cities, adding just one city to the list this past week.  Those currently listed (* indicates new listing) with the OLCC include:

Would you like to find out where you can currently purchase legal marijuana near you?  You can find dispensaries that are listed as registered for retail sales on the OHA’s website.