Cities and counties piled on to the banned list with OLCC, adding fourteen new cities and four new counties to the list.  While it is possible that a few more may be added, since Sunday December 27th is the official deadline, it is likely that this list is the final list of those that will have immediate bans.  Any additional bans will likely be referred to voters, since those bans were not subject to the same deadline as the immediate bans.  Check out the updated interactive map showing all currently listed banned cities and counties by clicking on the image below!

Hines: The Hines City Council decided not to opt-out of marijuana businesses, despite having very little opportunity for them to exist in their jurisdiction, according to the Burns Times Herald.  A few Council members supported allowing marijuana businesses, while others were opposed to the businesses.  In the end, they allowed the deadline to pass without implementing a ban in order to be eligible for distributed tax revenues from marijuana in the coming years.

Deschutes County: Deschutes County decided to pass a temporary moratorium to ban marijuana businesses in last Monday’s meeting, according to the Bend Bulletin.  The vote was unanimous, but it is only a temporary ban for 90 days.  They expect to revisit the ban with more information on potential challenges to regulation, rather than to put it to voters in the November 2016 Election - although that option still remains.

Newberg: The Newberg City Council has received recommendations from the city’s marijuana subcommittee on time, place and manner restrictions, according to the Newberg Graphic.  The recommendations will allow growers for up to two patients and 12 plants to exist indoors without any additional permitting required in some residential zones, but will not allow outdoor growing in those zones and will require additional permitting for others.  The group expects to meet again on January 7.

Sublimity: The Sublimity City Council passed a moratorium with a referral to voters to ban marijuana licensed activity, according to the Statesman Journal.  The City Council debated simply relying on business licensing to prevent marijuana businesses in the city, but after input for the city lawyer, they opted to put the issue to voters to “fortify” the city’s position.  The City Council is banking on voters approving the ban, since 63% of Sublimity voters opposed Measure 91.

McMinnville: The McMinnville City Council and Planning Commission both unanimously rejected a buffer zone proposed by Linfield College to prevent marijuana retail outlets from existing 1000 feet around its campus, according to the Yamhill Valley News Register.  The buffer request was a reaction to a proposed dispensary at the corner of Linfield Avenue and Baker Street.  The request was not received well, with several people noting that the college was definitely not a “drug free campus” and that most college students were of age and should be treated like adults.

Cove: The Cove City Council passed an ordinance to ban marijuana licensed activity at their last meeting, according to the Register Guard.  The vote means that they managed to beat the state deadline of December 27th and the ban will take effect immediately. 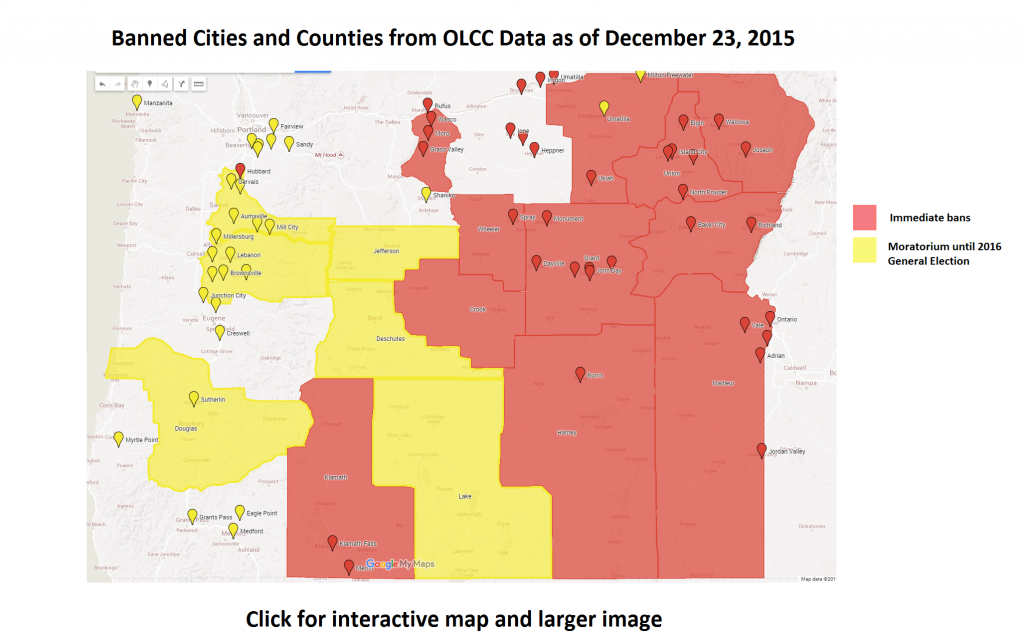 The OLCC has updated the list of banned counties and cities.  Four counties and fourteen cities were added as the December 27, 2015 deadline for immediate bans approached.  Those currently listed (* indicates new listing) with the OLCC include: