Confederated Tribes of Warm Springs: The Confederated Tribes of Warm Springs approved a plan to build a facility for growing marijuana on their reservation in Central Oregon and to sell it at tribe-owned stores outside the reservation, according to the New York Times. The tribe plans to enter into an agreement with state agencies to ensure compliance with state laws, and sales are expected to begin in the winter of 2016. The referendum passed with more than 80 percent of tribal voters supporting the proposal.  Marijuana remains illegal to possess on the reservation under tribal law.

Deschutes County: Deschutes County is expected to make decisions on local zoning and standards for marijuana businesses on Monday December 21st, according to the Bend Bulletin.  Property owners in the area are pushing for Deschutes County to opt-out of marijuana licensed activity, despite commissioners in Deschutes County previously rejecting the opt-out option.  Meanwhile, 160 local marijuana farmers, dispensary owners and others have signed a petition requesting that the county reject the land size limitations proposed by the planning commission that would only allow growing on sites that were at least 20 acres in the exclusive farm use zone or rural industrial zone.

Cove:  The Cove City Council may decide to opt-out of Measure 91, after a majority of 25 attendees at the last meeting indicated that they wanted the city to opt-out, according to the La Grande Observer.  Most opposition was based out of fear that allowing legal sales of marijuana would increase crime in the area, while some were concerned that people would come from all over Union County to Cove to purchase marijuana since it would be one of the only places cannabis consumers could acquire legal marijuana and that the additional traffic of approximately 43,000 trips to cove each year would not be good for the city.

Wilsonville: The Wilsonville city council voted 3-0 to adopt an ordinance which will refer a marijuana ban to voters in the November 2016 Election, according to the Portland Tribune.  The ordinance is expected to be formally adopted at the January 2nd meeting.

Mt. Angel & Silverton: The Mt. Angel City Council passed an ordinance to refer a marijuana ban to voters for both medical and recreational marijuana sales in the city, according to the Statesman Journal.  Meanwhile, Silverton has moved toward opening up the city’s industrial park to marijuana licensed activity.  The article notes the historical irony of the two cities, since Silverton was a dry county during the repeal of alcohol prohibition in the early 1900’s, while Mt. Angel allowed alcohol.

Falls City: The Falls City Council decided not to act on marijuana, and simply follow state law in order to receive tax revenue from sales, according to the Polk County Itemizer-Observer.  Since the City Council members feel it is unlikely that a dispensary will open in their city, they decided to “do nothing” in order to receive tax revenues under state law and to avoid voting in favor of marijuana. 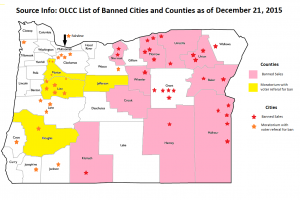 The OLCC has updated the list of banned counties and cities.  Those currently listed (* indicates new listing) with the OLCC include: